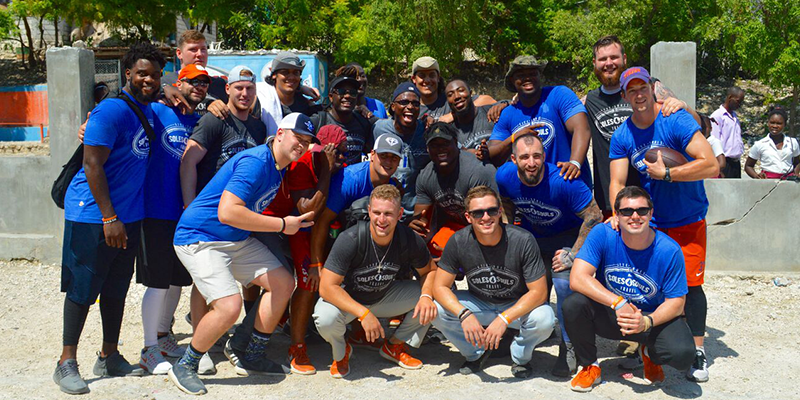 Tigers Take on Poverty in Haiti

Tampa Bay. January. Deshaun Watson looks up at the clock. Six seconds left. He throws the ball into the end zone.

The football fans among you might recognize this play as the touchdown pass that won Clemson University the 2016 College Football National Championship. It was an impressive win in which this close-knit team overcame a 14-0 deficit to beat their opponent 35-31.

The Tigers enjoyed some well-deserved fanfare for their win. The roar of the crowd. The excitement of the interviews. The thrill of the awards.

But that would not mark the end of the season, as the team reunited a few months later to flawlessly execute a very different playbook.

Haiti. May. The Clemson football team joined Soles4Souls on a week-long service trip. This is a new type of outreach for the university and definitely a new experience for the players. Unfamiliar or not, the team was up for the challenge! Champions on and off the field, the Tigers left a loving mark on the children of this beautiful yet troubled country.

The Tigers took charge of the shoe distribution process right away with the speed and precision of a well prepared unit. They split up into special teams: unloading the shoes, setting up, washing and sizing little feet. The end zone… making sure that each of the children they met walked away with a new pair of shoes that afford them protection from injury and disease, and provide them an opportunity to attend school. There were no fumbles at any of the schools and orphanages they visited, only extra points earned for countless smiles, hugs and giggles.

In the end, the team would celebrate not on a bright stage surrounded by cheering fans, but with an impromptu game of soccer alongside a group of teenage orphans. And instead of being honored with an award, they took the shirts off their backs and shoes off their feet as a gift for their new friends, once again proving that giving is better than receiving.

That week, the Clemson Tigers football team distributed over 500 pairs of new shoes. They did so quietly and with great humility. There was no press to cover the events. There was no trophy to present. But there was great fun. And gratitude. And blessings for another great year. And a very personal moment for one particular team member.

Kendall Joseph is a veteran linebacker from South Carolina. He had never visited Haiti, but has a special connection to the country: his father was born there. So as he felt the discomfort of the rocky paths…and witnessed the reality of extreme poverty…and spoke to little boys who endure it all—he imagined his own father growing up. And at that moment, he walked in his shoes.

Just like the Clemson Tigers came together as a team to win the National Championship and the hearts of hundreds of children in Haiti, we ask you to join the thousands of people all over the world who give their time, talent and treasure to help Soles4Souls fulfill its vision of disrupting the cycle of poverty.