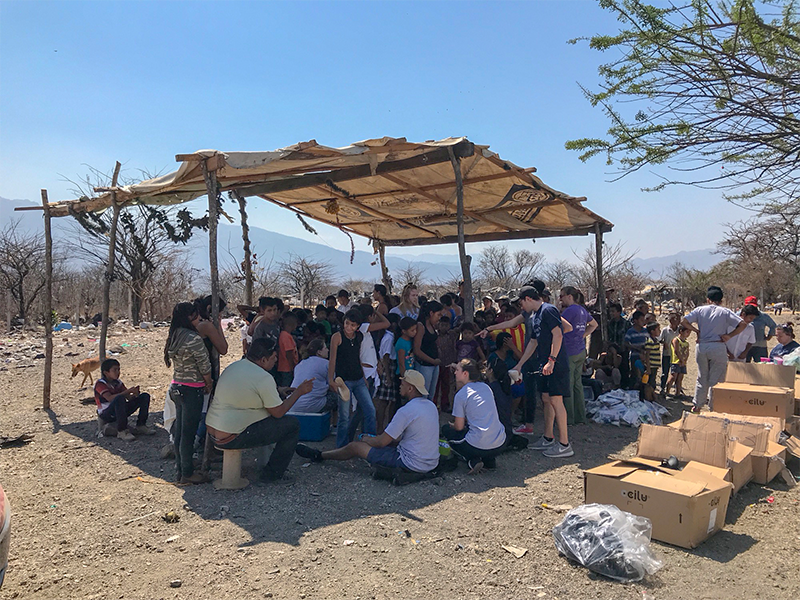 Providing New Shoes, Protection and Hope at a Dump in Guatemala

Those who help us distribute the gift of shoes around the world work hard to understand the concept of “extreme poverty”. But nothing can prepare them to face the harsh realities of life on less than $1.90/day.

In places like Chiquimula, Guatemala, these realities can include surviving in a makeshift community atop the city dump. There’s no color. Only dust, rocks and compacted trash. The heat of smoldering fires rises from below. And the stench of decay fills the air.  A last resort, desperate families take shelter under the cover of sticks and tarps. They have no bathrooms, no doors, no privacy. They make their living—their survival—scavenging for anything of value that can be sold for a small profit.  And most walk barefoot, their feet ruthlessly scarred by their surroundings.

“Is this what hell is like?” asked one of our heartbroken volunteers as she and the rest of the team set up for the shoe distribution. Would the brand new shoes donated by our partner companies and delivered with the financial support of thousands of individuals across the U.S. make a difference?

The answer came boldly in a yellow school bus. The children poked through the windows in laughter and cheer as if proclaiming, “Hope still lives here”. Their angelic smiles cut the darkness. And their joy reshaped the day.

The lines began to form. Our team skipped the ritual washing of the feet to preserve the little water available at a nearby city well. One by one, they sized and fitted each person, first the children, then the parents who had followed behind. And then they understood that our efforts have an impact. New shoes provide this community a lifeline for survival. The city may discard their trash here, but this is their home, their playground, their source of income. Their very lives are at stake. Their new shoes protect them from injuries and burns that they lack the strength or means to fight.

As the day came to an end, our team noticed a young boy and his mother. Eleven-year-old Lucas sat quietly and patiently at the edge of it all waiting for the crowd to subside. His mother heard about the distribution at the church where our in-country partner organizes weekly meal services and took a chance that he too could be served. And although he was not part of this community, his need was just as great. His shoes—rather what was left of them—provided him little protection from the fields he works day and night alongside his father.

We did indeed provide Lucas (and his surprised mother) new pairs of shoes. And through him our team was once again reassured of the value of our efforts.

Lucas and his mother, hands held in tight embrace, were soon lost to the horizon as they started the five-mile walk back home.