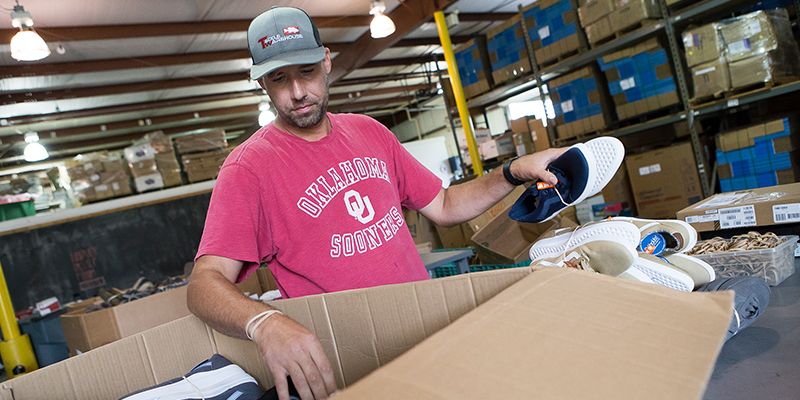 How Our Disaster Relief Policy Has Changed and Why

It’s hard to feel optimistic. The true devastation of Harvey and Irma, which at $200 billion combined still doesn’t count the human and animal suffering, is becoming clear in its terrible scope. 10x more people are displaced and 30x more are dead from flooding in south Asia. 500 people died in a mudslide in Freetown Sierra Leone a few weeks ago…at least that many still missing. And that doesn’t even count famines in Nigeria, Somali and South Sudan. Yemen, in addition to famine, is at the center of a crippling war that most of us have no idea is happening. But these photos will make it very real.

And yet. In the last two to three weeks, more than 100 companies have responded to our appeal for new shoes and clothes. Hundreds of people have raised funds or contributed to our relief fund. And the phone keeps ringing…the emails keep coming in. That’s a very good reason to be hopeful about our willingness to help take care of each other by doing what we can, where we can.

Which leads me to one of the most frequent questions we’ve been asked in the last week…”can we donate used shoes and clothes for the people in Texas, Florida and the Caribbean?” The short answer is that you can, but not through Soles4Souls.

At first, that strikes many people as mean or cold hearted. They point, correctly, to the huge need and the fact that people have nothing right now…wouldn’t used shoes be better than barefoot?

And it might. But we have three principles guiding us that lead us in a different direction:

1.     If you’re in a spot where you need a pair of shoes or some clothes, we’re going to do all we can to make sure you get new items.

2.     When we distributed used shoes all the way back in Hurricane Katrina, many people receiving them were not happy that all we had were hand me downs…some not really even wearable.

3.     The agencies we work with on the ground do not accept used product.

It’s hard to say “no” to someone who wants to help. It feels wrong to say and worse to hear it. But we have learned our lesson that, as a second wave responder, listening to the folks on the ground is the best way to get them what they need. In many cases those agencies are overwhelmed by things they can’t use and don’t have room for the things they do.

There is a way you can help with used shoes and clothes right now. As many of you who follow Soles4Souls know, a big part of our mission is to create economic opportunity by selling shoes to entrepreneurs in the developing world. One of the primary ways we use that revenue is to cover the cost of disaster response. So if you want to pitch in to help get NEW shoes, clothes, blankets and diapers to Texas, Florida and the Caribbean, by all means do a shoe drive. We’ll then turn around and make sure that those who need it most will get new items as they start to rebuild their lives.

I wish I had a simple answer. I wish that I could say yes, your used shoes are going on the feet of someone left displaced after Harvey and Irma. But it’s more complicated than that. What I can promise you is that we will always shoot straight with you and tell you exactly how it works to get shoes and clothes to those most affected, whether in Houston or Haiti, Baton Rouge or the Philippines.

By the same token, I can say that what so many of you have done/are doing/will do, is what makes me hopeful that through all the bad news, all the examples of us at our worst, there is a goodness in this world that will overcome the obstacles, no matter the cause.