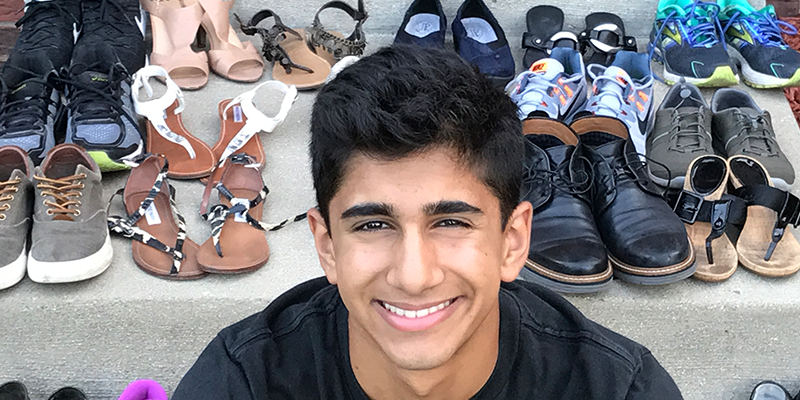 A love of running and cross-country taught Detroit teen Prateek Bhola about the importance of a good pair of shoes from a young age. When a cluster of growth spurts caused an excess of unusable shoes in Prateek’s closet, the high school student realized that there are millions of people that go every single day without even one pair. He was also able to witness this firsthand during his travels to India.

“On a trip to India, I became acutely aware of the disparity between my circumstances and those of others,” said Prateek. “I observed several young children and adults walking barefoot, in tattered clothes, often begging for a handout. Coincidentally after returning to the US, I read an article regarding the health and financial challenges generated globally due to lack of footwear.”

In search of a way to help alleviate this issue for those in need, the 16-year-old came across Soles4Souls and launched a shoe drive signing up for the organization’s Ten2Give program. The campaign challenges donors with an ambitious goal of collecting 10,000 pair of shoes to help fight poverty internationally. As a result, Soles4Souls provides Ten2Give participants with the opportunity to distribute brand new shoes to those in need right in their community.

For support, Prateek placed fliers in nearby neighborhoods, churches, local schools and more. His community was eager to help.

“A heartwarming moment occurred at a shoe drive when an 8-year-old boy told me that I was an inspiration to him! He then chose to help me rather than watch a movie,” recalls Prateek.

Prateek’s efforts also received both local and national media attention from WXYZ and Footwear News. Over the course of 18 months, Prateek not only picked up donations from over 50 homes and accumulated over 1,500 volunteer hours, he also reached his goal!

Prateek’s hard work will positively impact the lives of thousands of people internationally. The donated shoes will all be distributed to Soles4Souls’ micro-enterprise programs that create jobs in Haiti, Honduras and other developing nations. The resulting revenue will help fund the free distribution of new shoes and clothing in the U.S. and all over the world.

When Prateek reached his goal, he selected Detroit’s Philip House Mission homeless shelter as the local charity he wanted to benefit through the Ten2Give program. Soles4Souls donated 100 pairs of new shoes that were then given to community members in need at a distribution event hosted by Prateek’s friends and family.

“I truly believe that every single pair of shoes has been life-changing for those that have received them,” said Prateek, who recently became one of just 30 people in 2017 to receive a Youth Recognition Award from the Novi Youth Assistance organization. “I intend to continue my volunteer efforts for the remaining two years of high school and beyond. I believe I have been transformed by this endeavor and it has become a part of my life and lifestyle.”

We are so grateful for dedicated volunteers like Prateek!